Lichfield Cathedral's Choral Foundation: broadcasting to the nation since 1934 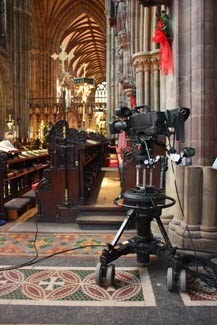 While I was trying to check the (fairly obscure) details of a piece of music that Lichfield Cathedral Choir has broadcast on BBC radio in the distant past, as is sometimes the way with the Internet, I serendipitously stumbled across an online archive of all the copies of the RadioTimes from 1923 to 2009 that the BBC has made available which I had not previously encountered. Having been scanned and optical character recognised (the processes whereby the computer turns a scanned image into searchable text, rather than just a picture), the data is not perfect. However, it provides a remarkable resource to explore all sorts of things.

From a broadcasting perspective, seeing how the BBC's radio stations developed from just a National and Regional service to the genre-based stations to the more recognisable Radios 1 to 5 we have today is interesting. But coupling this with the geekily written historical detail of the stations on Wikipedia and being able to see how their output changed in response to moments of historical significance is fascinating.

In the musical world, it is possible to track the career of individuals: one particular example I found was seeing a cathedral organist move from Oxbridge organ scholar to organist of one of the country's more notable cathedrals via various other abbeys and cathedrals through their appearances on broadcast choral evensongs. Alongside this, it also showed their involvement with other groups over the course of their career.

Having clarified the tiny detail for which I was originally looking, I ended up searching for 'Lichfield Cathedral', and this resulted in a whole range of programmes - on both radio and television - over the past ninety years. Because of this, I felt it was worth updating the details of broadcasts which I maintain on Lichfield Cathedral Choir's website.

Firstly, I was able to fill in a couple of blanks and add details about original broadcast times and stations to the existing list of broadcast choral evensongs. Gratifyingly, there were no additional broadcasts to add to this list (wading through past music lists 15 years ago clearly paid off), but I did remove some as the BBC's listings showed that the broadcasts were not always of the Cathedral Choir singing on them. In this list, it is interesting to see that in days gone by, the BBC seemed to install themselves in the Cathedral for a stretch at a time, as between the 1940s and 1960s there are runs of two or three weeks in a row when the service was broadcast from Lichfield, but then there are years between such runs.

Secondly, the list of other radio broadcasts was significantly fleshed out. This had not been something I had been collecting details for, but odd editions of Sunday Worship had crept into the audio archive, so I had included them. Thanks to the RadioTimes archive, I think the listing in now complete. From this, it is clear that the broadcasting of a matins-based service antedate the broadcasts of evensong (1937 as opposed to 1939), but acts of worship from Lichfield are trumped by a broadcast of an organ recital from 1934 (and a documentary style programme gloriously described as a 'microphone impression' of the Cathedral from the same year).

Thirdly, because of the amount of data involved in keeping copies of television broadcasts, these had never featured highly in the archives. However, having this information to hand, means this listing has also been completed. This list is not so extensive, and the majority of entries are from the past twenty years; nevertheless, it is nice to know there was a broadcast of Songs of Praise from Lichfield in November 1972.

Finally, the wealth of details that I discovered meant that I did not want to miss anything out, or be left confused when people offered a broadcast of choral evensong from Lichfield from the 1940s, as someone did some years ago, subsequently telling me it was an RSCM course. I have therefore created the supplementary broadcasts page which is where everything which has a musical connection broadcast from Lichfield is detailed. This includes broadcasts made by the Cathedral's chamber choir, recitals by organists visiting the Cathedral (and therefore not a part of the Foundation), the broadcasts of evensongs sung by other choirs, including an Eton Choral Course, the RSCM Festivals, and the BBC Singers directed by George Thalben Ball. The evensongs with the BBC Singers seem to be in addition to those broadcast as part of the 'standard' choral evensongs as they are on Sundays, not Tuesdays or Wednesdays: maybe there was a greater appetite for broadcast religion in the post-war years.

Overall, this is fortuitous timing as the choir's #LentQuiz which is currently running is based on recordings made of the Cathedral Choir over the past fifty years (the extent of the audio archive), and it is nice to have the records as complete as possible as the Foundation's 700th anniversary celebrations start on Easter Monday. However, there is still scope for development: ultimately, it would be nice to link all of the entries back to the RadioTimes original data so the complete records can be seen (I have necessarily cut some repeated details to save space). Also, as the OCR process is not entirely accurate, if 'Lichfield Cathedral' has not be recognised, my searches would not have found the records, so there could be some other programmes which may need adding at some point.

As with all such research, it is inevitably ongoing, there will be more to add, and there will doubtless be corrections. However, more excitingly, as this information is now available, it is my hope that we might find some of the recordings still exist and that the audio (and visual) archives can be expanded.
Posted by Richard Shakeshaft at 22:35 No comments: