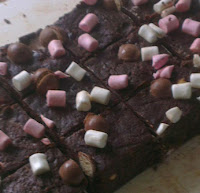 I recently discovered that the Buttery (or canteen) in my college produce what they call 'Homerton Tiffin'. Having enjoyed it with a cup of tea on several occasions, I decided to break my usual aversion to making cakes and try to work out the recipe so I could enjoy it without having to drive to Cambridge. I found a couple of tiffin recipes online which I have taken, merged and modified to come up with my own version.

I have tried a couple of incarnations (so far) and I made the one below for a cake sale at school last week. As I was asked for the recipe a couple of times, I thought I would write it down - rather than making it up as I went along - and share it here as an Easter present for those people who have eschewed chocolate during Lent.

The recipe is very flexible, and I would encourage people to experiment and try different (or additional) fillings or quantities depending on personal preferences; I feel that the ingredients marked with an asterisk are all optional or replaceable, or personal favourites could simply be added.


In terms of the optional items and other things I am considering trying, I have my eye on Twixes and Milky Ways instead of Mars Bars, the rum could be replaced by Brandy or Cointreau for an orangey fix, cranberries could replace the raisins, and nuts could be added for those to whom fruit 'n' nut is not anathema. In short, experiment. Mixing chocolate and biscuits is never going to be a disaster!

I have called this 'Tiffin', but whether that is an accurate description, I cannot say: it was suggested that the marshmallows make it 'Rocky Road', and that the rum and raisins make it a healthy snack for alcoholics.
Posted by Richard Shakeshaft at 14:52 No comments:

My reading continues as new books are published but over the past few months I have also considered some slightly older texts and explored sequels in series I have started previously. This is therefore the latest instalment of the reading I have been doing since my fourth such blog post last November.

As before, this is a collection of primary texts which are connected by the common thread of incorporating technology within their plots, and increasingly being concerned with the nature of humanity in technocentric worlds. For other readers this, and my previous posts, remain a remarkably up-to-date list of YA novels in this genre; my Amazon account still has some yet-to-be-published novels listed in the current orders, I keep scouring publishers' book lists for new additions, and I have more texts sitting awaiting my attention so this is unlikely to be my final reading list post.

The order of the list is simply the order in which I have read the texts, and there is therefore no significance to the order. I have included a brief descriptions against each title, but each image links to Amazon where fuller descriptions and reviews can be found.

Posted by Richard Shakeshaft at 18:06 No comments: