Hearing Susan Hill on BBC Radio 4 this afternoon reminded me of a review of her recent book, A Kind Man, which I read a couple of weeks ago. I do not know the book so cannot make any comment about it, but what I did object to was a remark made by the reviewer:

I’m an admirer of Susan Hill’s work, but I’m not sure what she’s getting here, though I accept this may be my fault, not hers.

The review was written by a Charlotte Moore and published in The Spectator (15 January 2011). Google lists too many Charlotte Moores for me to be certain, but I assume it is the Charlotte Moore who is also an author and writes for the Guardian and Telegraph newspapers.

If it is Moore the writer, such a sop will be – I guess – purely out of self-interest in the hope of a kind word from a writer who struck it lucky with a ghost story nearly thirty years ago. Nevertheless, I find the idea that a reader can see themselves to be at fault for failing to understand what has been written somewhat abhorrent, merely because Hill tells a good tale.

An author is a professional writer. It is their job to be able to communicate their ideas to their reader. Each reader will bring their own understanding to the text and, as any English Literature student will know, their reading is as valid as the next person's. It may be that the reader then chooses to go and research a detail to help explore or develop their interpretation, but this should not be a requirement and they should not feel compelled to do so. Despite not being obliged to do this, I have found a smartphone (with its Internet access) has made the process much easier, and the results can often be fascinating. Indeed, a few years ago I had a lengthy e-mail exchange with a member of the National Gamekeepers Organisation in an attempt to understand why, in two novels by two different authors set in World War I, references are made to dead birds being nailed to posts. (The conclusion we reached was that they were both referring to vermin lines.)

Placing a writer on a pedestal because they ‘must be saying something clever’ is wrong. If, as a reader, you did not ‘get it’, there was probably nothing to get, or the writer did their job clumsily, thereby preventing you from ‘getting it’. Whichever way, it should not be seen as the reader’s fault.

Before I get challenged about my role as a teacher of English Literature, I should stress that I am talking about readers, not students. Studying a text places more demands on the student-reader, and if a text has been chosen to be studied it is probably because someone somewhere feels that it has something to say; it may then be up to the teacher and student to discover what it is. And this is why studying a book can destroy the pleasure of reading it for people.

Read to enjoy reading and find books to study; study to facilitate reading. If the writer is not doing their job properly, a reader can stop reading and a student can explain why.
Posted by Richard Shakeshaft at 17:59 No comments:

The Gruffalo's child as a model learner 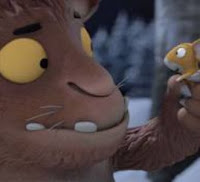 Although I enjoy picturebooks, I have not read The Gruffalo’s Child so, over Christmas, I did exactly what I advise my pupils not to do and watched the televised adaptation.

Displaying my teacherly inability to switch off, as I watched I was struck by the character of the Gruffalo’s child as she displays many elements of the learning dispositions which Guy Claxton has identified as part of his Building Learning Power (BLP) programme.

I understand the core values of BLP as being to encourage students’ lifelong learning habits and to make them independent learners who are not reliant on their teachers. To do this, Claxton has identified the four learning dispositions, or characteristics, which students need to be able to demonstrate. These are resilience, resourcefulness, reflection and reciprocity, and the Gruffalo’s child is an exemplary exponent of many of these.

In terms of her resilience, or emotional engagement, she notices details, spotting and following the animals’ trails, and is wholly absorbed in the task. Most importantly, she shows her perseverance as, despite set backs when she nearly drowns, has uncomfortable encounters with the snake, owl and fox, and is lied to by the mouse, she persists with her search for the Big Bad Mouse.

Her resourcefulness, or cognitive range, is seen in her question asking throughout the story, and the use of her imagination when drawing the image of the mouse. More advanced resourcefulness is shown by her making links between the trails of the animals and the search for her goal, and her reasoning as she uses her logic to deduce how each animal could be the Big Bad Mouse.

One of the characteristics of a successful learner which I stress as most important to my pupils is that of reflection and again the Gruffalo’s child is a good role model. She shows her ability to plan through her escape, and the revision of her ideas as she encounters the snake, owl and fox, and the distillation of her ideas through her identification of key details of each animal she meets.

The final learning disposition, reciprocity, is one which develops with age as pupils become less egocentric, and it is the area in which the Gruffalo’s child is weakest. Nevertheless, she does collaborate with the mouse (even though it is to her disadvantage), and she does listen attentively to the Gruffalo’s story and to the mouse’s ideas.

Adults, and especially teachers and parents, will recognise the importance of Claxton’s learning dispositions to a child’s development but, just as the Grufflo tries to protect their child, having the confidence to allow and encourage active and student-directed learning is sometimes a difficult boundary to overstep. It is, however, one which adults need to have the confidence to overstep for those in their care. Interestingly, these positive characteristics often seem to disappear as pupils move into secondary school and become more self-conscious, and it is at this age that teachers need to be explicitly encouraging children to use a wider range of learning techniques.

Originally written for the Children's Literature at Cambridge blog and first posted there earlier today, and with many thanks to Kristina Shakeshaft for mentioning BLP as we watched 'The Gruffalo's Child' together and thereby summarising the teacherly comments we were making about the Gruffalo's child's progress.
Posted by Richard Shakeshaft at 15:55 No comments: